Thank you for visiting our booth

We closed on December 10 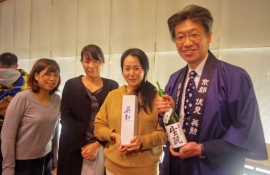 Every Tuesday and Thursday is “Brewery Day” 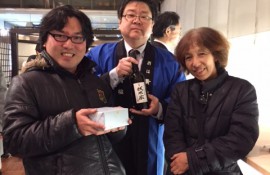 Every Tuesday and Thursday is “Brewery Day”

Kyoto City was the first municipality in Japan to enact a city ordinance to Promote the Proliferation of Kyoto Sake, Kanpai Jorei, on January 15, 2013.
Kyoto's Fushimi ward, which is home to many sake breweries, is one of a number of locations throughout the country which are known for their sake. The ordinance was put in place with the aim of promoting a deeper understanding of Japanese culture through the prism of sake, as well as encouraging the enjoyment of sake-for instance using sake as the beverage of choice for the toast at the start of a gathering.
In ancient times, sake-as a product of rice, that most precious of crops-was presented to the gods as a divine offering. The ritualistic use of sake as well as the practice of sharing the same sake cup, have become part of the cultural fabric of
Japan and are continued to this day. Whenever people get together, or even when two people have a drink, there is usually an
exclamation of "Kanpai!" as glasses or cups are brought together to mark the start of the
occasion. We toast the relaxing of social rules, as we sense formalities are beginning to loosen.
"Ladies and gentlemen, to your very good health and happiness..."
A hearty "Kanpai!" for the fine sakes of Fushimi!